Irresistible Ideas: How to build the secret weapon of master marketers

*Pricing reflects Early Bird Discount of $5. Payment is required in advance by Visa, MasterCard, or American Express through Paypal or check sent as soon as registration is completed. Seats not paid for in advance are not guaranteed.

Please note starting September 1, 2018 that Eventbrite fees will be passed on to members and non-members. 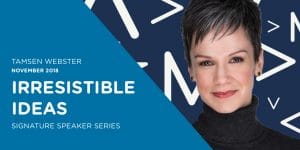 At the heart of marketing lies one seemingly elusive goal: how can we actually get people to love our stuff as much as we do? Thankfully, there’s a surprisingly simple answer, and it lies in how we come up with our products and services in the first place.

Tamsen Webster spent 20 years making messages to move minds and markets and four years turning ideas into action as the Executive Producer of one of the largest TEDx events in the world.

During this highly interactive session you will learn:

Tamsen’s own Red Thread weaves through her 20 years as a brand and message strategist, though she says she learned the most about inspiring change as a Weight Watchers leader.

As a TEDx Executive Producer, Tamsen coached experts, iconoclasts, and pioneers from around the world to build their Red Threads into Ideas Worth Spreading—and more than 9 million YouTube views.

Today, she’s a globe-hopping keynote speaker on storytelling, branding, change management, and idea development, and a go-to consultant for enterprise companies like Verizon, Johnson & Johnson, and State Street Bank who want to their big ideas to have an even bigger impact.

Tamsen lives in Boston with her other half/chief ballroom dancing partner, and two amazing boys with big ideas all their own.